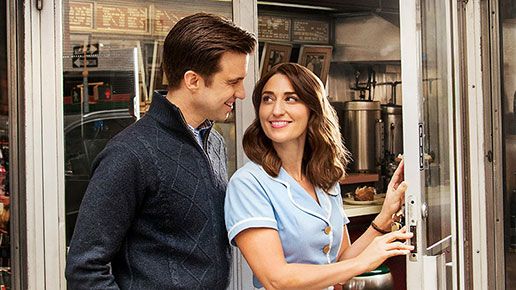 Waitress the Musical composer and lyricist Sara Bareilles is now starring in the West End production of her hit musical at the Adelphi Theatre… and Gavin Creel is here too!

Grammy award winner and composer Sara Bareilles debuts in the West End reprising the role of Jenna that she had already played for two runs on Broadway in 2017 and 2018. For the special occasion, she brought along her Broadway co-star and friend, Tony-winner Gavin Creel as Dr. Pomatter. The pair started performances on 27 January and will perform for a six-weeks run until 7 March 2020.

A Brief History of the Waitress Musical

Waitress The Musical is based on the 2007 film with Keri Russel and follows Jenna, a creative pie-maker who invents new weirdly-named pies according to what’s going on in her life, as she carries through an unwanted pregnancy in an unsatisfying marriage. Her new gynecologist is Dr. Pomatter, an equally clumsy and attractive man who really loves her pies and their maker, and a backing contest is about to be held in a nearby county. Will this give Jenna the strength to find a new recipe for her personal happiness?

Waitress The Musical officially opened at the Adelphi Theatre in March 2019 to enthusiastic reviews and will play in the West End until 4th July 2020 before embarking on a UK Tour! When Bareilles and Creel will end their engagement, the roles of Jenna and Dr. Pomatter will be reprised by Lucie Jones and David Hunter on 9 March.

Don’t miss the chance to see the amazing Sara Bareilles perform in her own show alongside Gavin Creel! Check the availability for tickets to see Waitress The Musical at the Adelphi Theatre on our website!

As August draws to a close that only tells us one thing…summer is over! That means it’s time to go …

There is movement in the West End. No other year has been this exciting nor has there been such a …

Let us get you into the mood for something great. Celebrate with us this month. We want to bring you …

The holidays are over and there’s a new wind sweeping through the West End. January and February are the …

November is busy this year. The list of shows opening are quite a sight over the next two months. So …

There’s a fresh new wind blowing through the West End. Time to take a look into the future. 2019, what’s …

Everyone’s making plans for the summer. Holidays are booked, sunscreens are applied and books are sorted through to be read …

It is March. Spring is almost here. You can see it, feel it and smell it. This year that means …